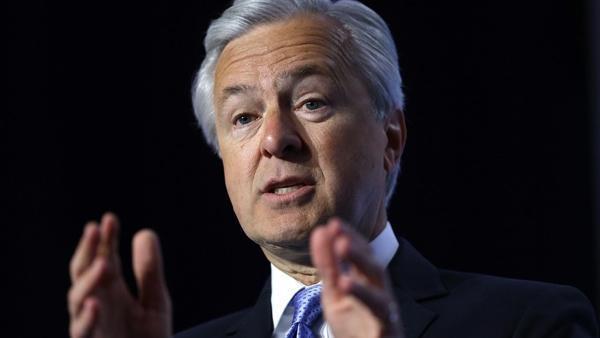 It's been a long time since a big bank CEO discussing the state of his industry sparked spontaneous applause. But that's what happened when Wells Fargo Chairman and CEO John Stumpf talked technology to those attending the Bay Area Council's 2016 Economic Outlook Conference in San Francisco May 17.

Given the pace of innovation among fintech startups, Stumpf was eager to remind his audience of bank-led innovations over the years, including the creation of what is today's Visa (NYSE: V) and MasterCard (NYSE: MA) as well as the ever-popular ATM.

But it was some of his predictions of what lies ahead that drew the most vocal approval from his audience of Bay Area business leaders.

"We may be the last generation to use user names and passwords," Stumpf said to a round of applause. The San Francisco banker also expects today's customers to be the last to use physical credit and debit cards. Wells Fargo is also testing biometric technology that could eliminate the need for passwords.

Wells Fargo (NYSE: WFC) is planning to roll out cardless ATMs this year. Bank of America (NYSE: BAC) said Wednesday that it's the first bank to undertake a broad rollout of the cardless ATM technology. BofA will expand its cardless ATM network to 5,000 of its 16,000 ATMs by year-end.

That effort begins with the installation of 2,400 cardless ATMs this month, including most of the bank's ATMs in San Francisco and Silicon Valley.

"Consumers are increasingly using their mobile devices to manage their daily lives, and we're committed to delivering solutions that give them convenient and secure options when it comes to managing their money," said Michelle Moore, head of digital banking at Bank of America. "Now in addition to using digital wallets for purchases, customers can use them to get cash at the ATM."

Investing in security remains a high priority for Wells, BofA and their rivals.

"We're spending a boatload — more than a boatload, a whole armada, is spent on cybersecurity," Stumpf said. (After his formal remarks, Stumpf engaged in a Q&A with PG&E (NYSE: PCG) Chairman and CEO Tony Earley. The two executives had some friendly competition over which one is losing more sleep over cybersecurity issues.)

Bank of America, for its part, says 20 million customers are active users of its mobile-banking app. In the first three months of 2016, new accounts opened at BofA through mobile banking jumped 50 percent from the same period a year earlier.

While California's two largest banks vie for bragging rights over the latest banking technology, executives at both banks would agree on Stumpf's assessment of what lies ahead when it comes to innovation in financial services.