New Money/Old Money: A look back at the newest U.S. hundred dollar note 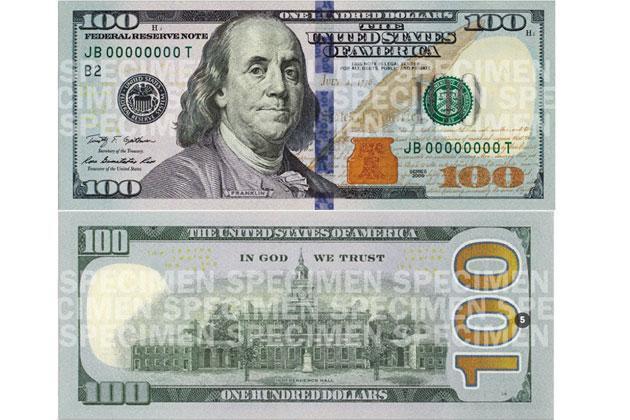 "New money" became a literal term as the U.S. Federal Reserve Bank released the latest revision of its venerable $100 note into the U.S. currency supply chain on October 8, 2013. Staying a few steps ahead of counterfeiting threats, this new bill was designed with improved security features, making it easier for banks and businesses to validate but more difficult for counterfeiters to fake and bamboozle. Not to worry, if you have any older hundreds, they are still good!

Michael Lambert, Deputy Associate Director of the Federal Reserve Board, in a U.S. Treasury video about the new bill, said over a decade of research and development had gone into the design. Surely this should instill confidence. Okay, so maybe it took Uncle Sam more than three years to debut those new Benjamins. And maybe the printing got screwed up a couple of times, resulting in some bills with blank spots and others with reportedly too much ink. (Those had to be destroyed.) In the end, the new hundreds appear to be doing their job.

There is almost a trillion dollars worth of hundred dollar bills in circulation today, and most of these notes are found outside the United States, with nearly two-thirds of all Benjamins held Internationally. That is why the Federal Reserve initially targeted much of its messaging to foreign countries. With that kind of acceptance worldwide the U.S. dollar is likely to continue as the currency of choice the world over for years to come.

Although there were more of the iconic "ones" in circulation than hundreds back in 2012, hundreds are growing at a faster rate and will likely one day overtake that famous picture of Washington as the note with the largest number in circulation.

One thing all these notes have in common is the paper they are printed on. Since 1879 one company has provided the paper on which US currency is printed. Crane & Co. of Dalton, Massachusetts has a long history of serving this country. Even as far back as 1776 Stephen Crane, the founder of the company, had a mill that issued notes used to pay soldiers during the revolutionary war.

Now the notes that the Liberty Paper Mill made back then may not have lasted until today, but today's notes are fairly robust. In fact, U.S. currency is designed so that it may be folded thousands of times before it tears and is rendered unfit for circulation. A piece of plain paper can only last a few hundred folds. Because of that, in terms of longevity, the hundred, less circulated than other notes, can last up to 15 years. Whereas in comparison a ten will wear out in less than a third of that time. Not to worry, the Fed keeps the presses rolling to replace all the notes that are returned for destruction.

Both these features are designed with security in mind. The previous design was not entirely ineffective, however. The new note keeps a few features that continue to work:

As with all things in the currency supply chain, forecasting demand and managing the logistics is essential to ensure the right amount of inventory, at the right time and place, and at the lowest possible cost. To kickoff the new note, the Fed had stockpiled 3.5 billion of the new $100 bills at its 28 reserve bank cash offices. Those were circulated down to the 9,000 banks they do business with directly. The number of bills that are required at any given time varies but tends to run in cycles. Here in the U.S. for example, demand spikes around Christmas time, when folks want crisp new bills to give as gifts.

In spite of the advent of new technologies in printed currency, the good old American dollar printed on paper is still the standard of the world.