Microsoft versus Google. Will Android take over the ATM from Windows? 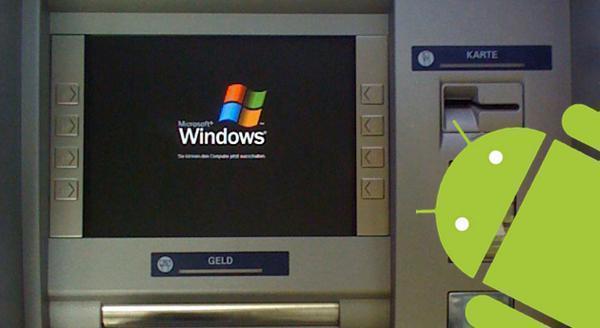 Software that runs the internal operation of an Automated Teller Machine (ATM) has seen several waves of adaptation since the first ATMs were introduced more than forty years ago. And now the ATM industry finds itself once again at a crossroads where the next king of the hill of ATM software will be crowned. Will it be another version of Windows? Or will Google Android step in to steal Microsoft's thunder in yet another venue?

In the beginning one of the first widely recognized software standards was known as the Diebold 911/912 protocol. It received its name from an early model ATM introduced by the US ATM manufacturer Diebold Inc (NYSE: DBD) and it persists in many forms to this day being emulated by other software makers over the years. In the mid-90's, with the advent of lower cost ATMs and surcharging as a business model, independent ATM deployers drove the next wave of ATM software. The lower cost mostly dispense-only units favored by independents were built on a platform from IBM (NYSE: IBM) known as OS/2. Although IBM's OS/2 had failed to catch on in the PC desktop world, the ATM industry made it the next software standard and hundreds of thousands of machines around the world ran reliably and securely for years on OS/2. That is until IBM announced it was phasing out support for OS/2 in 2006. By then manufacturers had already shifted their focus to the desktop leader Microsoft Corporation (NYSE: MSFT) Windows and soon settled in on the XP platform and its variants.

In looking back one might notice that in all those years OS/2 had never been a target of malicous hackers, while Windows-based devices were always the victim of choice. Nonethless manufacturers continued to rely on Microsoft Windows and most moved to certify Windows 7. With each version of Microsoft Windows came more functionality to offer and more vulnerability to address. The cost to secure a Windows based ATM was impacting more and more on the decision to deploy new versions. The scene was set for a potential disrupter to enter the game.

What will drive the next generation of ATM software? In the latest annual "Software Trends and Analysis" guide — sponsored by UK-based software maker KAL and published by ATM Marketplace (available for download here) several factors were named by decision makers in how they will choose which platform will win out as the next standard. As it turns out security and fraud prevention along with optimizing operational costs were identified as the most critical issues ATM operators focus on today. With the trend towards mobile banking and multi-function capabilities, additional attention was also placed on new functionality, enhancing customer experience and the impact on branch transformation.

With the landscape layed out the big players in this game are once again Microsoft and Google. Since Microsoft XP was first released, several versions of the Windows OS have followed. In fact the end of life has already been declared for the latest adapted version Windows 7 when Microsoft support sunsets in 2020. While most ATMs today run either an XP or Windows 7 version, change will be inevitable and new considerations will drive that change. The industry buzz now is to skip all versions of Windows 8 and look to the latest release from Microsoft in Windows 10. That is unless you consider some non-traditional alternatives.

In a paper from the ATM Industry Association (ATMIA), CEO Mike Lee suggests: "For those deployers seeking alternatives, the association has a next-generation ATM architecture looking into such innovations as Linux-based ATMs or Android-operated ATMs." Recently NCR Corporation (NYSE: NCR), a major manufacturer and competitor to Diebold rolled out Kalpana a cloud/Android based platform that aims to change the way ATMs operate. Cardtronics Inc (NASDAQ: CATM), the mega-owner/operator based in Houston, TX is piloting the platform.

Linux has always been a niche player in the operating system world and has struggled to gain market share as an ATM OS. Nonetheless with Microsoft controlling the release, upgrade and support cycles of its software, ATM operators may seek alternatives. ATM operators who want to synchronize and better manage their hardware and software upgrade cycles may consider Linux as a non-Microsoft alternative. Banks in both Brazil and India are testing this concept now. The limited adaptation and short time frame though may once again hurt Linux chance to make any real inroads.

As technology continues to evolve, consumer demand for ease-of-use and functionality increases, and operator's need to mitigate security risks becomes more critical, the next generation of ATM software will be tasked to face up to these challenges. Microsoft and its Windows OS is the incumbent with a mixed reputation that has constantly fought to retain loyalty and win confidence. Google Android is a formidable challenger that has proven itself in the mobile phone marketplace and is already making inroads into the ATM space. And Linux is a venerable sideline player that has enjoyed years of loyalty with a dedicated core of users who know and respect its capabilities as a secure computer OS. The battlefield is the ATM... and the next big battle is about to begin.