US Dollar Catches a Bid Ahead of Non-Farm Payrolls (NFP)

- Yesterday saw a strong bullish reversal develop in US equities after comments from Larry Kudlow, and that strength has carried over into this morning’s trade. The S&P 500[1] is now testing another level of Fibonacci resistance around 2662, as this is the 38.2% retracement of the February sell-off in the index.

- The US Dollar[2] has continued to cling to the 90.00 level for support, and as the US opens for the day a bullish drive is helping to craft fresh two-week highs. Tomorrow brings Non-Farm Payrolls for the month of March, and this will likely keep the US Dollar on the move. A heavy focus will be paid to the Average Hourly Earnings portion of tomorrow’s report as markets attempt to hone in on whether we’ll see an additional two or three rate hikes out of the Fed in the remainder of this year.

- Are you looking to improve your trading approach? Check out Traits of Successful Traders[3]. And if you’re looking for an introductory primer to the Forex market, check out our New to FX Guide[4].

Do you want to see how retail traders are currently trading the US Dollar? Check out our IG Client Sentiment Indicator[5].

It’s been a busy 24 hours across financial markets, with a key driver showing up in yesterday’s morning’s US session. As global stocks were starting to take on a worrying overtone, with the S&P 500 appearing very near a re-test of the February double-bottom[6], White House Chief Economic Advisor Larry Kudlow offered some comments to Bloomberg News that seemed to be crafted specifically for traders’ ears. Mr. Kudlow framed tariff talk as more of a negotiations rather than a done deal, reminding that ‘none of the tariffs have been put in place yet,’ and that it would likely take up to two months to actually begin implementation.

This was music to markets’ ears and US equities quickly started a rally that lasted into this morning’s European open. A bit of resistance has started to show in S&P 500 futures, and this is coming-in at the 38.2% Fibonacci retracement[7] of the February sell-off. Bulls have appeared to be rather undeterred after this resistance test, as we’ve seen a build of higher-low support since that level came into play earlier this morning. 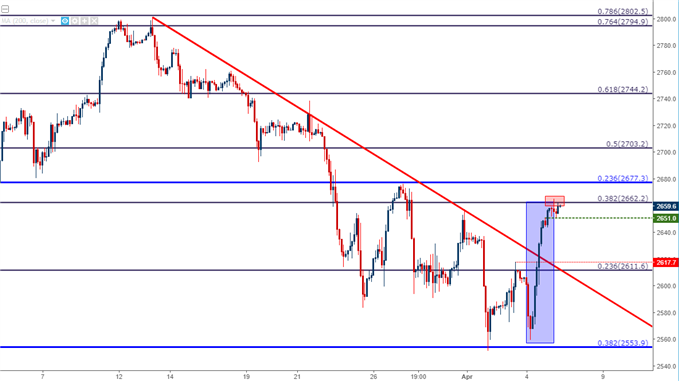 Chart prepared by James Stanley[8] NFP, Canadian Jobs Numbers on Deck; Powell Speech Ahead of US Market Close Tomorrow’s economic calendar[9] brings Non-Farm Payrolls out of the United States, and we’re also getting Canadian Jobs numbers at the same time; making for an especially pensive backdrop in USD/CAD