- US Stocks showed a bit of recovery in the latter-portion of yesterday’s session, but those gains could not hold as Fibonacci resistance came-in after the US close, and the S&P 500[1] is moving right back towards the Monday low. This exposes the double bottom from the February sell-off around 2,530, and if that cannot hold up on a re-test, the door is opened to bearish breakouts in the S&P 500. We discussed this in yesterday’s webinar, which is available from the following link: S&P 500 Starts Q2 on a Sour Note as EUR/USD Tests Support[2].

- For all of the cross-market fireworks currencies have been rather tame, and this could be a good thing for a trader as support and resistance has largely remained respected up to this point. Below, we look into a few of the more popular areas by looking at the range in the US Dollar, the build of support in EUR/USD[3] and some resistance areas around USD/JPY[4]. Of particular note is the support-build in EUR/USD this morning after a disappointing set of inflation numbers were released. The fact that bulls came in to show higher-low support helps to highlight the continued topside potential in the pair.

- Are you looking to improve your trading approach? Check out Traits of Successful Traders[5]. And if you’re looking for an introductory primer to the Forex market, check out our New to FX Guide[6].

Do you want to see how retail traders are currently trading the US Dollar? Check out our IG Client Sentiment Indicator[7].

EUR/USD is holding on to support after a slightly disappointing release of March inflation numbers[8]. Headline inflation printed in-line at 1.4% for the Euro-Zone in March, and core inflation came in just a touch below the expectation, coming in at one-percent flat versus an expectation for a 1.1% print. Despite the disappointment, EUR/USD was unable to encroach upon yesterday’s low which remained above the March swing-low, and this keeps the door open for topside plays in the pair[9] as we move towards Friday’s release of Non-Farm Payrolls numbers. 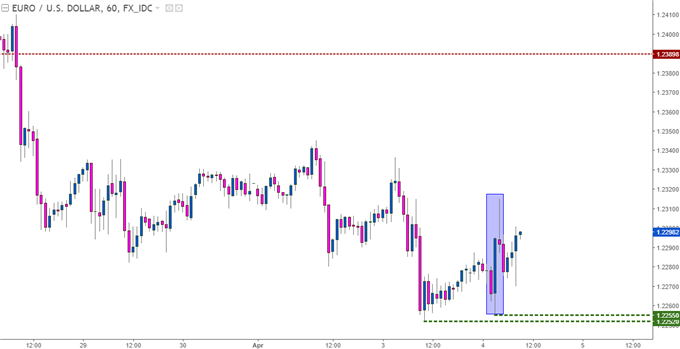 Chart prepared by James Stanley[10] Yen as the Euro 2.0? Notable here is how Japan is now seeing inflation at a faster pace than Europe[11]. Japanese inflation came-in at 1.5% in February while Europe saw that 1.4% print in March. We’ll have to wait to get March inflation figures out of Japan, but this is something that can build-in to further Yen gains as we move deeper into the year. While most of 2017 was spent with markets debating the timing