- The US Dollar has been on the move, marked by a strong run during yesterday’s US session that saw DXY[1] re-ascend above the 90.00 level. But bulls have not been able to make much ground since resistance came-in around 2:00 PM ET yesterday, and price action is oscillating around the 90.00 level as a bit of pressure began to show during the Asian session and then again around the European open.

- With many markets closed tomorrow in observance of Good Friday, today is the effective end of the first quarter of 2018. It’s been an eventful period, both in markets and geopolitics, and Q2 is shaping up to be quite interesting as we’re looking for rate hikes out of the UK with another possible move out of the US in June.

Do you want to see how retail traders are currently trading the US Dollar? Check out our IG Client Sentiment Indicator[4].

Dollar Bulls Show Up As End of Q1 Nears

While equities were on the move earlier[5] in the week with currencies taking a back seat to the action, the roles reversed yesterday[6] as the US Dollar shot-higher while the S&P 500[7] meandered within a range. The big item over the past 24 hours was a jump of USD[8] strength as DXY rallied back-above the 90.00 level. This strength started to show just ahead of the release of the final read of 4Q GDP numbers out of the US, which were revised higher by quite a bit as we saw that 2.5% number nudged up to the final read of 2.9%.

US Dollar via ‘DXY’ Four-Hour Chart: Jump to 90.00 Finds Sellers as Resistance Sets In 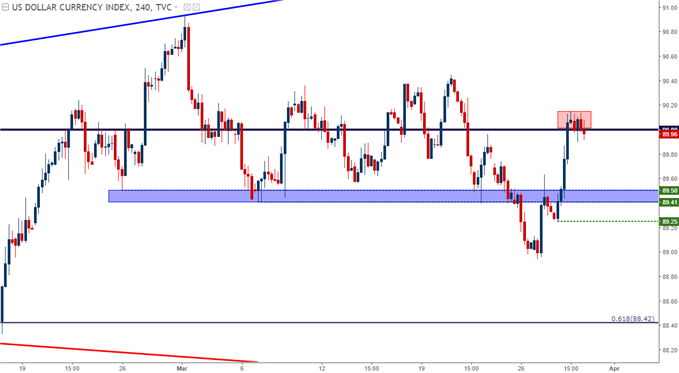 Chart prepared by James Stanley[9] Many are looking for reasons behind such an aggressive counter-trend rally, and while reasons are dangerous for traders, the combination of that GDP print combined with the fact that we’re nearing the end of Q1 means that we were likely seeing some element of quarter-end flows driving a counter-trend rally[10]. This could equate to a short-squeeze type of scenario as near-term USD strength adds pressure to existing shorts, creating further bullish demand as those shorts cover-up ahead of the end of the quarter. But – this is not meant to nullify the move. The jump-higher happened, and this is something that traders would need to accept regardless of their stance or opinion or ‘feeling’ around the sustainability of USD-strength. This does, however, open up a series of