A monetary policy announcement from the Bank of England is in focus in European trading hours. No changes are expected this time around but the tone of minutes from the sit-down – most notably the vote count on the rate-setting MPC committee – will warrant attention.

As it stands, the markets are leaning toward a rate hike in May, pricing in its probability at 65.3 percent. Seeing a meaningful minority vote in favor of one this time around might help set the stage the move, boosting its perceived likelihood and sending the British Pound upward.

On balance, the markets are probably expecting go-to BOE hawks Ian McCafferty and Michael Saunders to call for tightening. If so, that makes a 7-2 tally in favor of “no change” the baseline scenario. This means that 6-3 or above might lift near-term rate hike chances, while 8-1 or below diminishes them.

The US Dollar traded broadly lower in Asia Pacific trade as regional markets took their turn to react to the outcome of an FOMC[3] policy announcement that proved to be less hawkish than investors feared[4]. The Yen stood out as the only one of the rates sensitive majors to capitalize, rising as US Treasury yields fell.

At the other end of the G10 FX yield spectrum, the Australian and New Zealand Dollars were unable to revel in the greenback’s woes. The Aussie was brought down by disappointing employment data[5] while the Kiwi was held back as the RBNZ downgraded its inflation outlook[6].

See our free guide to learn how you can use economic news in your FX trading strategy[7]! 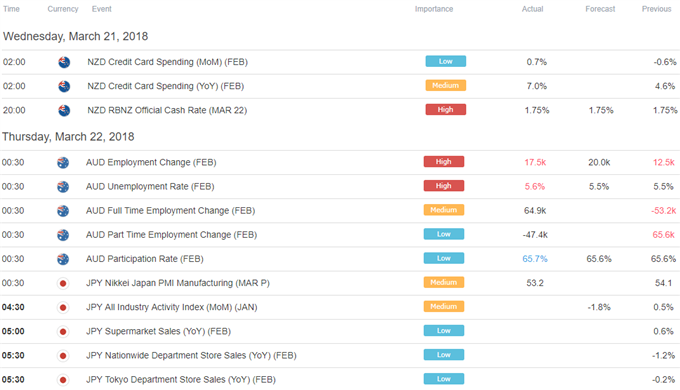