The Federal Open Market Committee (FOMC) interest rate decision may rattle the recent rebound in EUR/USD as the central bank is widely expected to raise the benchmark interest rate to a fresh threshold of 1.50% to 1.75%, but a dovish rate-hike may produce headwinds for the greenback as it dampens the scope for a more aggressive hiking-cycle. 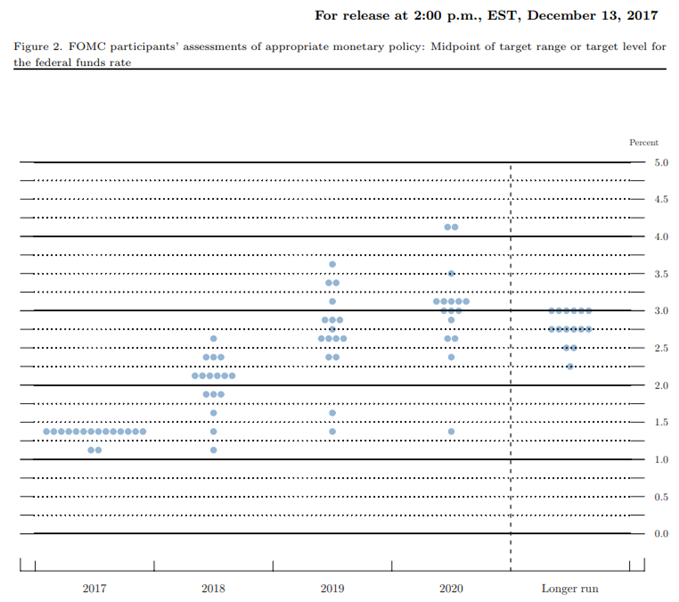 Market participants are likely to pay increased attention to the updated forecast coming out of the FOMC as the committee appears to be on track to further normalize monetary policy over the coming months. Chairman Jerome Powell and Co. may continue to prepare U.S. households and businesses for higher borrowing-costs as ‘a majority of participants noted that a stronger outlook for economic growth raised the likelihood that further gradual policy firming would be appropriate,’ and a fresh batch of hawkish rhetoric may generate a bullish reaction in the U.S. dollar[3] as it boosts bets for another rate-hike at the next quarterly meeting in June.

However, more of the same from the FOMC may drag greenback as it curbs speculation for four rate-hikes in 2018, and ongoing projections for a longer-run Fed Funds rate of 2.75% to 3.00 may ultimately fuel the near-term rebound in EUR/USD as Chairman Powell and Co. appear to be on a preset course.

The Federal Open Market Committee (FOMC) stuck to the same script at Chair Janet Yellen’s last meeting, with the central bank reiterating that ‘economic conditions will evolve in a manner that will warrant further gradual increases in the federal funds rate’ even as the committee voted unanimously to keep the benchmark interest rate at 1.25% to 1.50%. The comments suggest the FOMC will follow a similar path to