Canadian Dollar Up on NAFTA Hopes, NZ Dollar Down Before RBNZ

The Canadian Dollar continued to push higher, extending yesterday’s advance. That followed a report from Globe and Mail claiming that the Trump administration has dropped the demand that cars imported from NAFTA countries contain at least 50 percent US-made content. Markets read that to signal a possible breakthrough in renegotiation of the free trade pact.

Meanwhile, the New Zealand Dollar fell ahead of the upcoming RBNZ rate decision[1]. The target cash rate is overwhelmingly expected to remain unchanged but a recent run of disappointing economic data has stoked speculation about a dovish turn in official rhetoric, pushing policy normalization further out into the future. As it stands, futures pricing implies a hike in the third quarter of 2019.

The US Dollar corrected slightly lower in Asia Pacific trade having returned to the offensive in the prior session as markets position for the upcoming FOMC monetary policy announcement. The greenback has trended higher since the middle of last week[2] amid speculation that the US central bank will signal acceleration of its rate hike cycle.

The markets have priced in December’s outlook update calling for three 25bps rate increases in 2018. Investors’ outlook for the subsequent two years still trails the central bank’s projection by 50-75bps however. An upgrade of policymakers’ forecasts echoing a recent hawkish turn in official rhetoric and a confident tone from Chair Powell at the post-meeting presser may push the benchmark currency still higher. 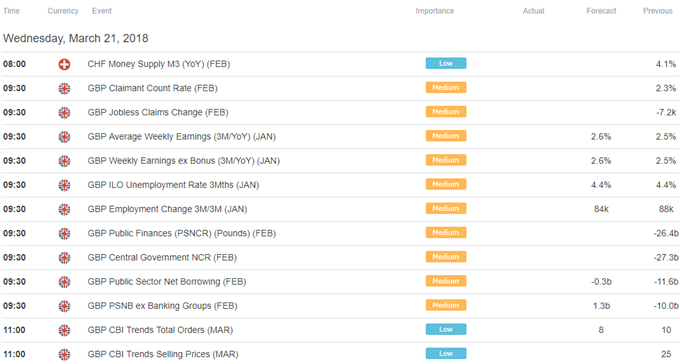