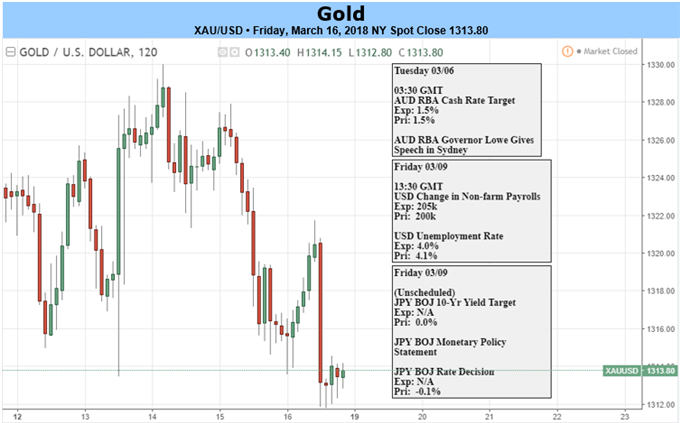 Find out what retail traders’ gold buy and sell decisions[3] say about the coming price trend!

Gold prices were originally up to a decent start last week, boosted by a US CPI report. There, February’s inflation was in-line with expectations. The downside was that real average hourly earnings dropped, from +0.7% m/m to +0.4% m/m. The US Dollar[4] fell on that aspect and this increased demand for the anti-fiat yellow metal. However, on Thursday things turned south.

Absent a major catalyst, the greenback appreciated broadly against its major counterparts alongside local 2-year government bond yields. This naturally sapped the appeal of gold and caused it to close at its lowest point in more than two months. The move appeared to reflect pre-positioning for next week’s FOMC monetary policy announcement which brings us to what is in store for gold next week.

This meeting is scheduled to occur on Wednesday at 18:00 GMT. There, the markets are unanimously expecting benchmark lending rates to increase to a range of 1.50 – 1.75%. However, that itself is not what investors will be paying attention to. Back towards the end of February, Fed’s new Chair Jerome Powell hinted the possibility of a fourth rate hike by the end of the year[5].

Thus, the forward guidance of the monetary policy announcement will be what traders care most about. At this point, three rate hikes are just about priced in for this year looking at Fed Funds Futures. If the tone from the central bank echoes Mr. Powell’s favorable outlook for the economy, we could see an increase in hawkish policy expectations. This risks boosting the greenback and weakening gold.

Beyond that, keep an eye out for Fed commentary towards the end of the week that could echo the rate decision. On Friday, we will get speeches from members Raphael Bostic, Neel Kashkari and Eric Rosengren all within a span of 12 hours. In addition, the preliminary estimate for February’s US durable goods orders will cross the wires on the 23rd as well. Taking into consideration the risks, the fundamental forecast for the yellow precious metal will have to be bearish for the coming week.

To contact Daniel, use the comments section below or @ddubrovskyFX[6]