- USD/JPY[1] is trading above its daily 21-EMA for the first time since January 8 as traders shrug off land deal scandal involving Japanese PM Abe and FM Aso.

- GBP/USD[2] pennant remains in focus as UK Chancellor of the Exchequer is set to give annual budgetary speech.

- Sentiment for the US Dollar[3] remains mixed at the start of the week.

For longer-term technical and fundamental analysis, and to view DailyFX analysts’ top trading ideas for 2018, check out the DailyFX Trading Guides[4] page.

The US Dollar (via DXY[5] Index) has nudged higher this morning ahead of the February US CPI report (which I'll be covering live starting at 8:15 EDT/12:15 GMT here[6]). Otherwise, the news flow out of Asia and Europe has been rather dull, suggesting that investors around the world are keeping an eye on the inflation data as they get ready for the Federal Reserve's March policy meeting next week - a meeting in which rates markets are already pricing in a 100% chance of a 25-bps rate hike.

Following the news of a potential scandal emerging in Japan, Japanese FM Taro Aso has strongly refused to resign, and traders have shrugged off the implications that trust in the Abe government would be eroded. Accordingly, if the Abe government is safe, so too are his policies underlying 'Abenomics,' the cornerstone of which is the weak Japanese Yen[7]. 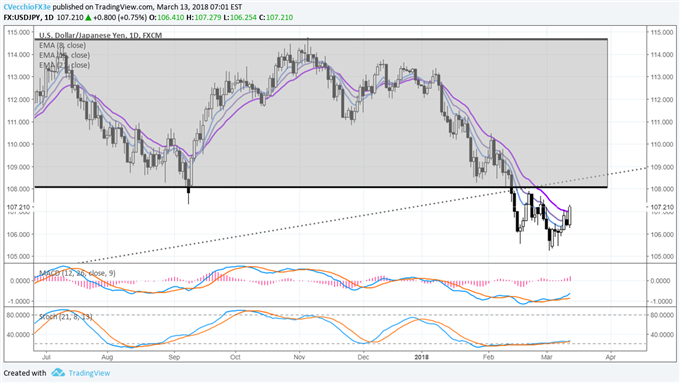 USD/JPY has traded through the daily 21-EMA for the first time since Janaury 8. While a close through said moving average wouldn't mark the end of weakness - price remains on the downside of the 52-week range that defined 2017 - it would certainly constitute a shift in the outlook from USD/JPY from 'bearish' to 'neutral.'

We don't think this warrants a shift to a 'bullish' outlook yet as price remains below the uptrend from the late-2012 and mid-2016 lows (dotted line on chart above). The upcoming US CPI report for February this morning will serve as a key catalyst for all USD-pairs today, not just USD/JPY.

UK Chancellor of the Exchequer is set to deliver the annual budget today in a speech that marks the top event risk for the British Pound[8] on Tuesday (and indeed, the entire week). While the event has historically led to a fair deal of volatility among the GBP-crosses, traders seem to be more interested in Brexit headlines for the time being; 1-day and 1-week implied volatility readings remain within the confines of recent trends. 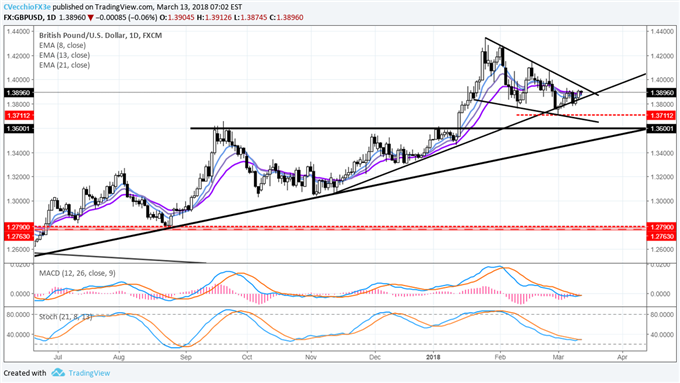 Ahead of the Hammon speech