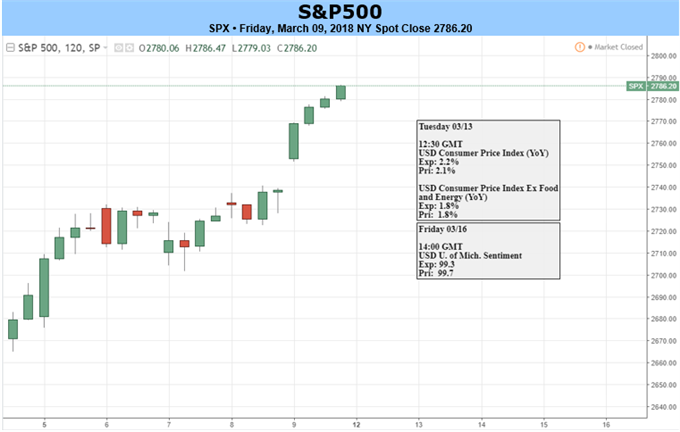 To see the DailyFX analysts’ Top Trading Opportunities for 2018, check out the DailyFX Trading Guides page.[4]

On Friday, the U.S. jobs report showed 313k jobs added to the U.S. economy during the month of February, beating the +205k consensus estimate for NFPs. The average hourly earnings figure (an inflation gauge) missed the 2.8% estimate with a print of 2.6%, which helped fuel a jump in pre-market futures. Next week holds a few ‘high’ impact data points via CPI on Tuesday, Retail Sales on Wednesday, then UofM Sentiment on Friday.

The market surged 1.74% on Friday, breaking out above the trend-line running of the high and closing near a recent peak at 2789. With the Nasdaq[5] 100 trading at record highs, it looks like the other major indices will try and keep up and make a move on records of their own. A breakout above 2789 will further along this notion and build on the already higher low in place on March 2nd by putting in a higher high in the sequence since the Feb spike-low. 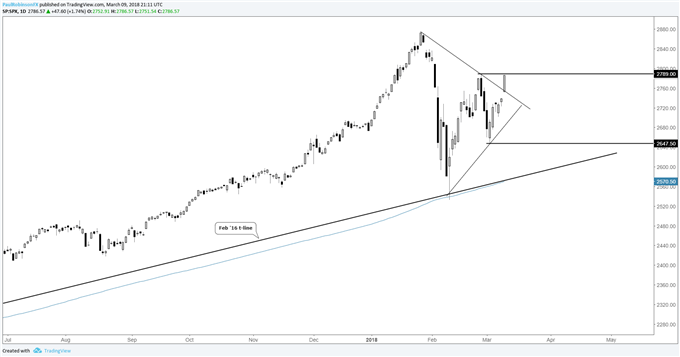 On Thursday, the DAX reacted positively to the ECB, rallying 200 points from high to low following the meeting with the help of a weakening euro[6]. Looking ahead to next week, there are no ‘high’ impact events on the docket. For a list of all economic data with estimates and release dates/times, see the economic calendar.[7]

The DAX is doing its best to recovery, but so far is still having the look of a counter-trend rally rather than a renewed rally. However, with the leading U.S. market pointed higher the DAX could start to follow along, with even more help if the euro trades sideways to down. Last week the market took out a steep trend-line off the record high, but given its angle it isn’t viewed as all that important; more work is still needed to turn the picture out-right bullish.

On further strength, the first notable level of resistance arrives at just over 12600, while support clocks in at just above 12k, then down below 11900. If the market sinks back to the low-end of support, the risk of another leg lower increases significantly. With risk appetite getting a bid, though, it seems unlikely the DAX will sell off to that extent; it’s more likely to be a laggard on the upside than anything at this time.