2017 was a year marked by constant surprise that stocks were not falling after the global political landscape was shaken so aggressively in 2016 through multiple elections. So far, while 2018 has had volatility spikes early on that fundamentally shook the comfort out of many investors, there also appears to be a fulfillment of the new post-crisis and central bank intervention market.

Naturally, traders and investors have never come out of a market so heavily supported by low sovereign yields that made borrowing cheap thanks in large part to central banks buying debt at historic levels. However, inflation has become the key factor that some say is missing and otherssay cannot rise without aggressively breaking the confidence that has marked recent leg of the extended risk rally.

Unfamiliar with Key FX Fundamental Factors to watch? No worries, I created a primer for you here[2]

Fixed Income or sovereign bonds give traders a wealth of information that makes them impossible to ignore if you’re trying to grasp capital flows and drivers of growth. As explained in the primer piece, because fixed-income securities give investors fixed coupons (give or take a return to par if purchased at a discount or premium if purchased after issuance in the secondary market), they are uniquely concerned about inflation. When receiving a fixed series of payments for a period of time, a rising rate of inflation is the second worst enemy aside from default to investors.

Since 2016, global bond yields have been moving higher meaning that the securities themselves are moving further away from par. Given the historic low in yields (premium in debt issuance) seen over the last few years, the rise in yields and specifically, the flattening of yield spreads over different tenors are causing investors to question where the next big opportunity lies. 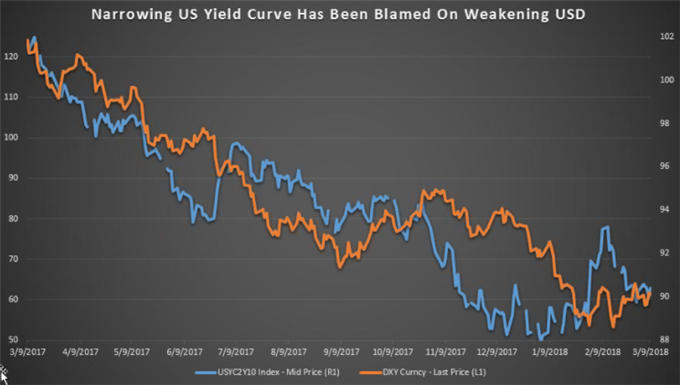 Goldilocks is a term used to describe a news release that shows an economy is running hot, but not too hot for concern that would cause a central bank to sound an alarm. The traditional headline number for Friday NFP showed the US added 313k jobs and outshone while the focus was on the Average Hourly Earnings or Wage Inflation component. Such a number bodes well for GDP growth with stable participation while wage