- The Euro[1] trade-weighted exchange rate is up by +9.7% year-over-year, and inflation in the Eurozone continues to run well below the ECB’s medium-term target of +2%: this is a mix that calls for a dovish hue to ECB commentary.

- Many EUR-crosses remain trapped in ranges, in particular, EUR/GBP[2] and EUR/USD[3]; the former is closer to a breakout than the latter.

- Retail trader sentiment[4] suggests further gains are possible for both EUR/GBP and EUR/USD, given positioning ahead of the meeting.

For longer-term technical and fundamental analysis, and to view DailyFX analysts’ top trading ideas for 2018, check out the DailyFX Trading Guides page[5].

The European Central Bank’s March meeting today will produce a new set of Staff Economic Projections. This is one of the four meetings during the year in which the central bank does so, raising the bar in terms of risk for the Euro.

Given that the Euro trade-weighted exchange rate is up by +9.7% year-over-year, and inflation in the Eurozone continues to run well below the ECB’s medium-term target of +2%, it seems inevitable that there will be some degree of pushback from President Mario Draghi and the Governing Council over an early exit from their QE program. Just how much is the question.

Indeed, even if policymakers continue to point to another small taper once the current pace runs its course in September 2018, they are likely to signal that there will be a ‘buffer window’ in which no more asset purchases are being untaken but rates will remain on hold. We’re not looking for the ECB to signal that they’ll be raising rates until at least Q3’19.

Overall, it appears that we could be looking at a redux of the January meeting in terms of price action: when all is said and done, EUR-crosses will end the day closer to their opening levels than choosing a direction overall. 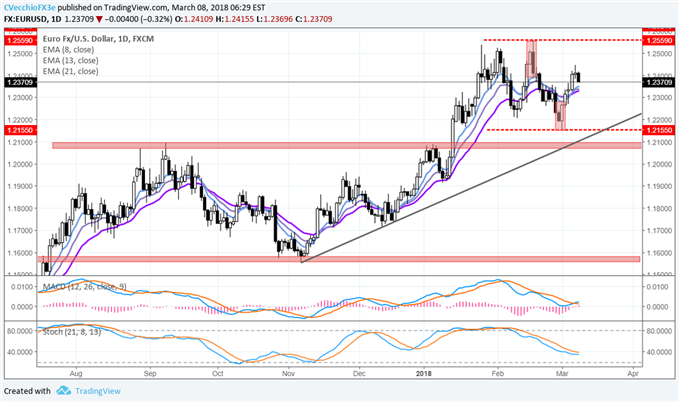 EUR/USD has carved out a new range between 1.2155 and 1.2559 over the past three weeks, with both support and resistance defined by daily key reversals. Even though price remains above its daily 8-, 13-, and 21-EMA envelope, momentum indicators such as MACD and Slow Stochastics have only started to turn higher.

Given the backdrop for the US Dollar[6], whereby the path of least resistance is lower in the DXY Index[7], it would stand to reason that without a firm dovish tone by the ECB today, EUR/USD seems more likely to naturally test the topside of its key reversal range near 1.2559 over the coming sessions than the support near 1.2155. 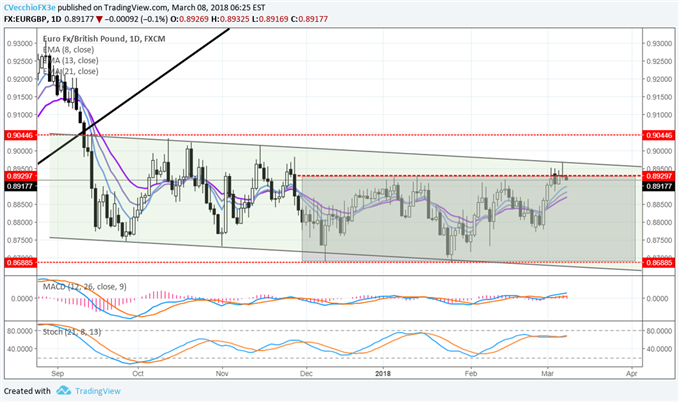 EUR/GBP's slight descending channel since September 2017 has been on our radar for some time, even as