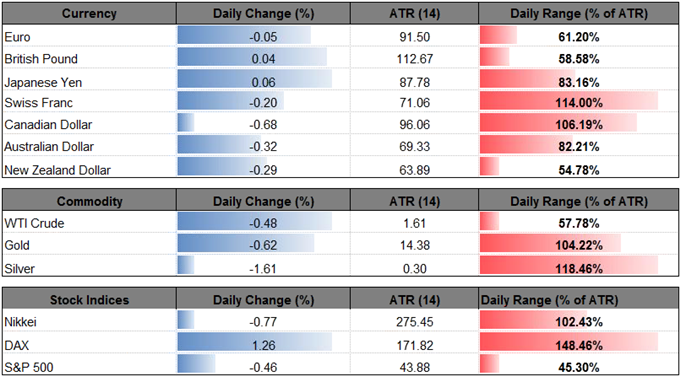 The near-term rebound in AUD/USD fizzles as Reserve Bank of Australia (RBA) Governor Philip Lowe tames expectations for an imminent rate-hike, and the pair may continue to consolidate over the next 24-hours of trade as market attention turns to the key developments coming out of the U.S. economy.

Even though Governor Lowe reiterates that ‘it is likely that the next move in interest rates in Australia will be up, not down,’ the fresh batch of cautious remarks suggest the central bank remains in no rush to lift the cash rate off of the record-low as‘the expected progress in reducing unemployment and having inflation return to target is likely to be only gradual.’ As a result, the RBA appears to be on track to retain the current policy throughout the first-half of 2018, and the wait-and-see approach may keep AUD/USD confined within a wide range especially as the Federal Open Market Committee[3] (FOMC) appears to be on course to deliver a 25bp rate-hike later this month.

Moreover, the 235K expansion in the ADP Employment report may pave the way for an above-forecast Non-Farm Payrolls (NFP) print, with a group of positive developments likely to heighten the appeal of the U.S. dollar[4] as it fuels speculation for four Fed rate-hikes in 2018. Keep in mind, the near-term outlook AUD/USD has perked up as the pair breaks out of a narrow range, with the Relative Strength Index (RSI) snapping the bearish formation carried over from the previous month, but the lack of momentum to extend the recent series of higher highs & lows may lead to range-bound conditions as market participants weigh the outlook for monetary policy. 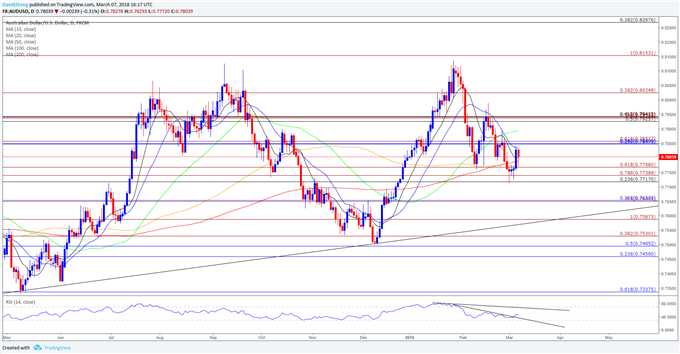 USD/CAD remains bid as the Bank of Canada (BoC) keeps the benchmark interest rate at 1.25%, and the near-term resilience in the dollar-loonie exchange rate may persist over the remainder of the week as the bullish momentum appears to be gathering pace.