- The Bank of Canada hosts a rate decision at 10 AM ET this morning, and this is followed by the European Central Bank on Thursday morning and the Bank of Japan reporting later on Thursday night (Friday morning in Asia).

- As USD-weakness comes back into the fold[1], strength in both the Euro[2] and the Yen come into the spotlight ahead of the respective rate decision, and it would appear as though both banks are in similar spots albeit with different timelines. In EUR/USD[3], bulls remain in-control as we saw for much of last year as market particpants try to position in-front of a taper or a move away from stimulus. This theme has recently gotten started in Japan after inflation jumped in December and January, and Yen-strength remains a viable theme as we approach Thursday’s Bank of Japan interest rate decision.

If you’re looking for longer-term analysis on US Stocks, the Euro or the U.S. Dollar, click here for our Trading Guides[6].

Yesterday’s surprise announcement of departure from White House Economic Advisor Gary Cohn took many by surprise, and this led to a bump-lower to both US equities and the US Dollar. The announcement came later in the day after the US Dollar had already started to put in bearish cues earlier in the session[7]. The S&P 500[8], however, saw a 45-handle sell-off following the Cohn announcement before finding a bit of support around 2684, which had helped to provide a swing-low in latter-February. Since that support came-in overnight, prices have bounced up to another level of relevance: The 50% Fibonacci retracement[9] of the February sell-off resides at 2703, and is currently finding some sellers around this level. 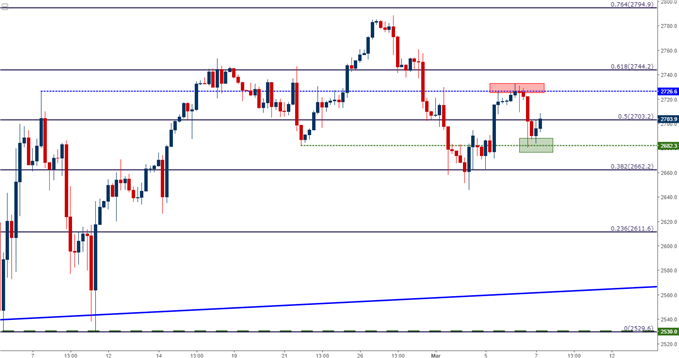 The US Dollar had already started another bearish move[11] earlier on the day, and the Cohn announcement brought on more sellers as DXY[12] sank below 89.50 briefly before buyers showed around 89.40. We’ve been largely range-bound ever since, with price action[13] oscillating between the levels of that 89.40 support combined with some resistance coming-in around 89.60-89.65. This keeps the door open for short-side strategies in the US Dollar[14], as bulls have been unable to defend last week’s higher-lows after another test above the 90.00 level on DXY.