US Dollar Back in Downtrend as Trade War Rhetoric Intensifies

- Any hope that the aluminum and steel tariffs would be avoided seemingly vanished in an instant with the resignation of US President Trump's top economic advistor, Gary Cohn.

- Canadian Dollar[1] remains under pressure as BOC looks set to back off previous hawkish tone in light of NAFTA renegotiations.

- Retail trader sentiment[2] once again suggesting a weak trading environment for the US Dollar.

For longer-term technical and fundamental analysis, and to view DailyFX analysts’ top trading ideas for 2018, check out the DailyFX Trading Guides page[3].

Despite the rebound in higher yielding currencies and risk-correlated assets yesterday, we wrote that "we're not sure if the jump in optimism is anything more than a near-term knee jerk response rather than risk appetite fully turning the corner." It seems that the former, not the latter, is indeed the case.

Now that the staunchest proponent of free trade, Gary Cohn, has been relieved of his duties in the White House, it would appear that aren't any policy advisors surrounding US President Trump that will stop him from going full throttle with enacting tariffs and starting a trade war[4] with consequences around the globe.

As we've written previously, the shift to protectionism, as was the case with the 2002 steel tariffs, is a negative development for the US Dollar. The DXY[5] Index has fallen back into its downtrend from the mid-January and early-February swing highs, and is close to reentering the downtrend that guided the greenback lower since early-November. 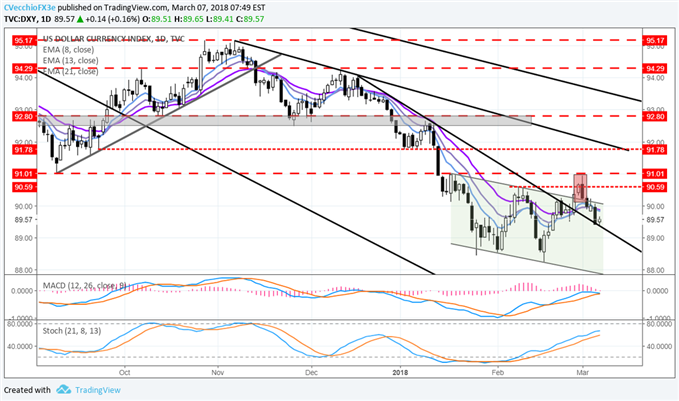 Price has undercut the February 26 low at 89.50, with the DXY Index closing yesterday at its low of 89.43. While choppy trading may emerge over the next 48+ hours thanks to key event risk - the Bank of Canada rate decision today, the European Central Bank rate decision tomorrow, and the February US Nonfarm Payrolls report on Friday - the path of least resistance for the US Dollar remains lower. The news wire is a potent source of risk for the greenback unto itself.

Focusing on the first of the major event risk due, the Bank of Canada seems poised to back off of its previous hawkish tone that produced a rate hike in January and high expectations for another in the first half of this year (80% implied probability for a second hike in the first half of 2018 as recently as the start of February).

But the ongoing renegotiations of NAFTA combined with the intensification of protectionist rhetoric from the Trump administration gives the BOC ample reason to suggest it will remain neutral for the foreseeable future. Coming into today, rate hike odds for a second hike in the first half of 2018 have fallen to 60%. There may be further room for weakness in the CAD-crosses should these odds fall further.