RSI Pushes into Overbought Ahead of BoC Meeting 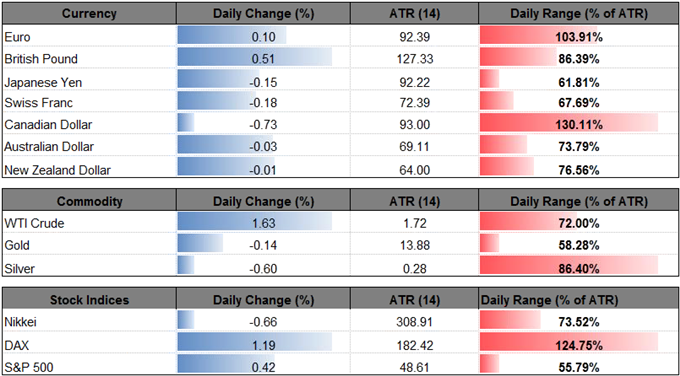 EUR/USD clings to the recent series of higher highs & lows even as Italy faces a hung parliament[4], but the near-term rebound in the exchange rate may unravel as data prints coming out of the U.S. economy fuel speculation for an imminent Fed rate-hike. 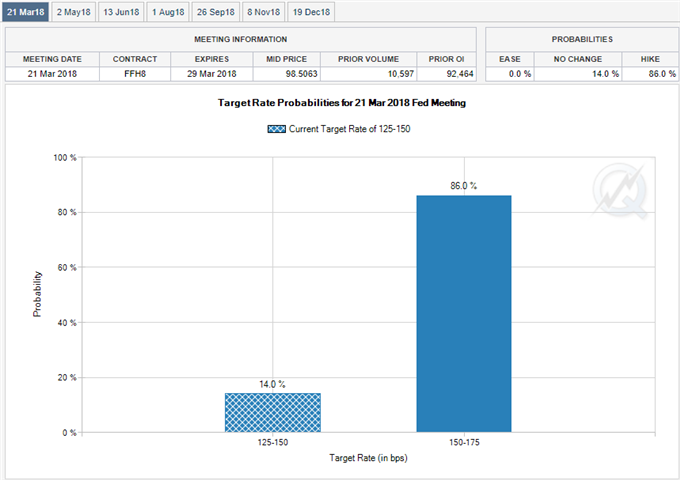 The above-forecast print for the ISM Non-Manufacturing survey should keep the Federal Open Market Committee[5] (FOMC) on course to deliver three rate-hikes in 2018 as Chairman Jerome Powell points out that ‘further gradual increases in the federal funds rate will best promote attainment of both of our objectives,’ and the central bank may continue to prepare U.S. households and businesses for higher borrowing-costs as ‘gradually reducing monetary policy accommodation will sustain a strong labor market while fostering a return of inflation to 2 percent.’

As a result, Fed officials may strike a hawkish tone ahead of the interest rate decision scheduled for March 21, but the fresh developments coming out of the European Central Bank (ECB) may keep the single-currency afloat if President Mario Draghi and Co. continue to alter the outlook for monetary policy.

Even though the Governing Council remains in no rush to remove the zero-interest rate policy (ZIRP), the ECB may start to reveal a more detailed exit-strategy as the asset-purchase program is set to expire in September. A batch of less-dovish remarks may spark a bullish reaction in EUR/USD as the central bank looks to taper the quantitative easing (QE) program over the coming months, but more of the same from the Governing Council may drag on the single-currency as market participants scale back expectations for higher borrowing-costs in the euro-area. 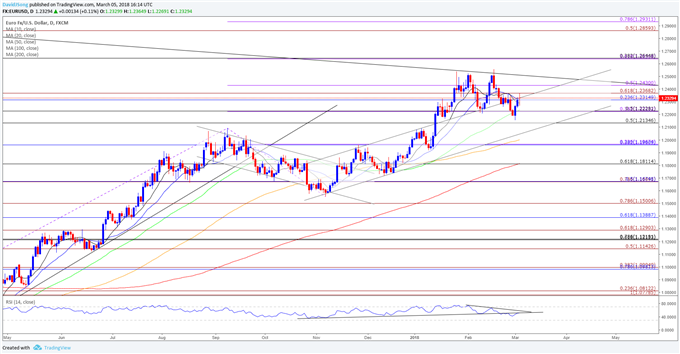 Are you looking to improve your trading approach? Review the ‘Traits of a Successful Trader[6]’ series on how to effectively use leverage along with other best practices that any trader can follow.

USD/CAD clears the December-high (1.2920) ahead of the Bank of Canada’s (BoC) March 7 meeting, with the pair at risk for a further advance as it extends the series of higher highs and lows from the previous week.

Fresh remarks from Governor Stephen Poloz and Co. may do little to alter the near-term outlook for USD/CAD as the central bank is widely expected to keep the benchmark interest rate hold, and the BoC may merely attempt to buy more time as the ‘Governing Council will remain cautious in considering future policy adjustments.’ In turn, key developments coming out of the U.S economy may have a greater impact on the dollar-loonie exchange rate as market attention turns to the U.S. Non-Farm Payrolls (NFP) report on tap for later this week.

With that said, topside targets remain on the radar for USD/CAD, and the pair may continue to retrace the decline from 2017 especially as the Relative Strength Index (RSI) breaks above 70 and pushes into overbought territory. 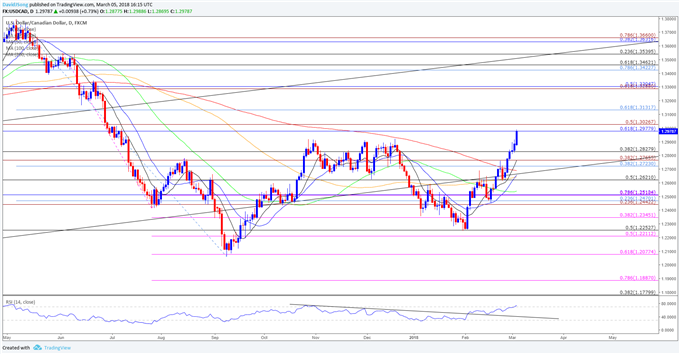 Want to know what other currency pairs the DailyFX team is watching? Download and review the Top Trading Opportunities for 2018.[7]

Interested in having a broader discussion on current market themes? Sign up and join DailyFX Currency Analyst David Song LIVE[8] for an opportunity to discuss potential trade setups!