Markets were in a dour mood at the start of the trading week, with Asia Pacific shares suffering heavy losses. This translated into weakness for the sentiment-geared Australian and New Zealand Dollars while the usually anti-risk Japanese Yen[2] advanced.

A worrying election outcome in Italy was probably at significant culprit. Official results are still pending but preliminary exit polls suggest the anti-establishment Five-Star Movement (M5S) and the hard-right League parties emerged strongest. They might even end up with over 50 percent of the vote among them.

While coalition talks will probably stretch on for weeks after the final tally is unveiled, this makes for a distinct possibility that the next government in the Eurozone’s third-largest economy will be strongly influenced by eurosceptics. In fact, they may lead it. This has understandably unnervedstability-loving markets.

Trade war jitters are probably another headwind. US President Donald Trump sent markets reeling[3] when he announced a steep hike in tariffs on imported steel and aluminum last week. Traders now wait with bated breath to see what countermeasures from key economies like China and the EU might look like.

The Euro is little-changed for now, seemingly opting to wait Italy to produce a decisive outcome before committing one way or another. Poll-watching will probably consumer traders’ attention in hours ahead.Earlier gains following successful coalition talks in Germany have tellingly evaporated however.

UK PMI surveys headlines the European data docket. The composite gauge is expected to show manufacturing- and service-sector growth accelerated in February. Recent data outcomes have deteriorated relative to forecasts however, opening the door for a disappointment that hurts the British Pound[4].

See our free guide to learn how you canuse economic news in your trading strategy[5]! 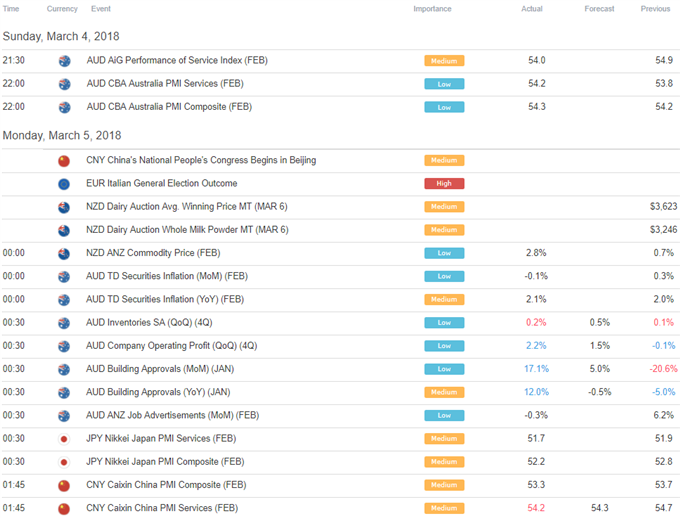 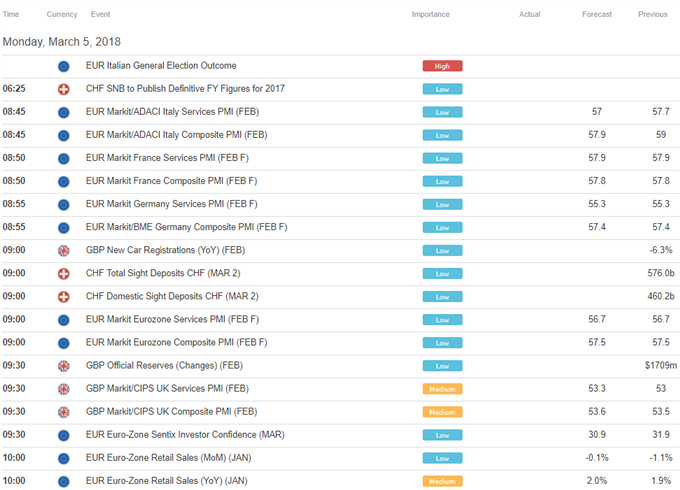 To contact Ilya, use the comments section below or @IlyaSpivak[7]onTwitter