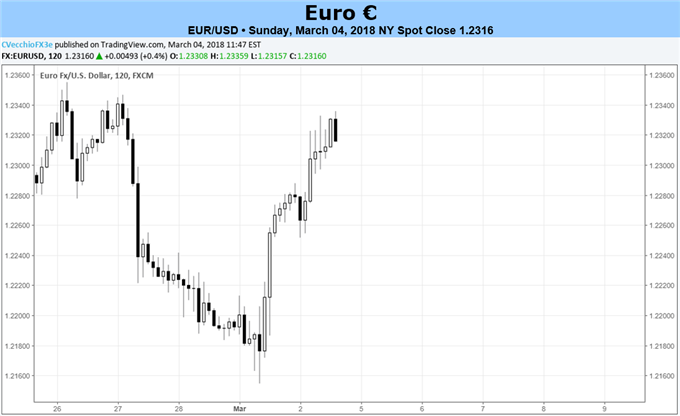 - Italian election results won’t be officially released until Monday morning, and exit polls have a history of being well-off the market. Take what you see at market open on Sunday with a grain of salt.

- The ECB is likely to signal that easing will continue for the foreseeable future, especially given how far below target inflation is running. Ongoing Euro[1] strength isn’t making their job any easier.

- The IG Client Sentiment Index[2] has cooled on EUR/USD[3] in the near-term, although the retail crowd remains net-short.

The Euro was having a fairly tough week until Thursday, when US President Trump signaled the start of a new trade war over aluminum and steel tariffs. While political risk out of the United States is rising, market participants have seemingly overlooked the risks emanating from the Eurozone.

But maybe that’s for good reason. Even though the Italian elections are being held on March 4, no one seems to be batting an eye. After all, no party is expected to achieve the 40% threshold of votes in the lower chamber that would grant them the automatic majority needed to secure the power to form a government on their own. Instead, according to polls before the polling blackout went into effect, the anti-EU populist party, MS5, appears set to get the largest share of the vote – mind you, it was polling less than 30%.

It would thus appear that a hung parliament is going to emerge when the final votes are tallied. On March 4, the first exit polls will come out around 17 EST/22 GMT, right as FX markets open. However, Italian exit polls have been historically unreliable, deviating from actual results by about 5%; take them with a grain of salt.

The final vote tally won’t be released until approximately 8 EST/13 GMT on Monday, March 5. The timing of the vote results means that volatility in the EUR-crosses is probable as the numbers are released in drips and drabs without any clear context; it seems unlikely the market will be too committal to a direction, if at all, until Monday.

Later in the week, the European Central Bank’s March meeting will produce a new set of Staff Economic Projections. This is one of the four meetings during the year in which the central bank does so, raising the bar in terms of risk for the Euro.

Given that the Euro trade-weighted exchange rate is up by +9.7% year-over-year, and inflation in the Eurozone continues to run well below the ECB’s medium-term target of +2%, it seems inevitable that there will be some degree of pushback from President Mario Draghi and the Governing Council over an early exit from their QE program. Indeed, even if policymakers continue to point to another small taper once the current pace runs its course in September 2018, they are likely to signal that there will be a ‘buffer window’ in which no more asset purchases are being untaken but rates will remain on hold. We’re not looking for the ECB to signal that they’ll be raising rates until at least Q3’19.

Now that futures positioning is back on the rise again – net-longs held by speculators increased to +138K contracts through the week of February 27, up from +126.1K in the week prior – it won’t take much for the Italian election results or the ECB to knock the Euro back. But neither event may prove all that significant in the days ahead, especially if attention remains on US President Trump’s call to arms in a trade war.

See our long-term forecasts for the Euro and other major currencies with the DailyFX Trading Guides[5].

To contact Christopher, email him at This email address is being protected from spambots. You need JavaScript enabled to view it.[6]