- The US Dollar has posed a brisk turn-around after the announcement from President Donald Trump of a potential 25% tariff on Chinese Steel imports. This announcement had a near-immediate impact on the Greenback, and that weakness has largely continued ever-since. This has also brought upon a deeper bearish move in US equities that looks to continue upon this morning’s open.

- EUR/USD[1] is in the cross-hairs this weekend as elections take place in Italy. Traders should be very, very careful of weekend risk here, particularly given the pair’s price action this week. Also of consideration are a basket of Central Bank rate decisions next week out of Australia, Canada, Japan and Europe. The next week brings a heightened-risk backdrop across FX markets that will likely also have some pull in equity and bond markets.

If you’re looking for longer-term analysis on US Stocks, the Euro[4] or the U.S. Dollar, click here for our Trading Guides[5].

Thursday Turn-Around in the US Dollar

It’s been a big week across global markets[6] already as we had the first appearance of note from new Fed Chair Jerome Powell. The net result of Mr. Powell’s two-day testimony has been a pullback in US stocks along with some rather interesting price action[7] in the US Dollar. The Dollar put in strength in the hours before Mr. Powell was to begin on Tuesday, and that strength largely continued into yesterday. Prices pulled back to higher-low support as Mr. Powell began his second day of testimony; but a surprising announcement from President Donald Trump of tariffs on Chinese steel helped to provoke an aggressive sell-off in the Greenback. That weakness has largely remained since, and prices are now attempting to cauterize some support around the previously-key level of 90.00 on DXY[8].

USD via ‘DXY’ Back to 90.00: Tariff Talk (in Red) Reverses Powell-Provoked USD Strength 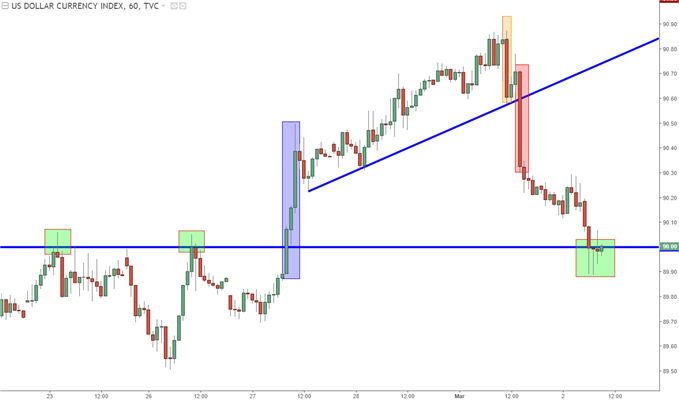 Next Week is Big

First and foremost – there is weekend risk around the Euro. Italian elections can keep the Euro volatile[10], particularly around the Sunday open, and holding weekend risk is even riskier than usual. So, if holding anything Euro related going into the weekend, be careful.

While this week had a heavy US-focus[11] next week spreads out around-the-globe, as we get major Central Bank rate decisions out of Australia, Europe, Japan and Canada. There are some rather interesting themes that’ll come into question around these prints, with heavy emphasis on what the Bank of Japan might say after an aggressively strong-Yen has started to show after a rise in Japanese inflation. Below, we’re looking at the high-impact events on next week’s economic calendar[12]. 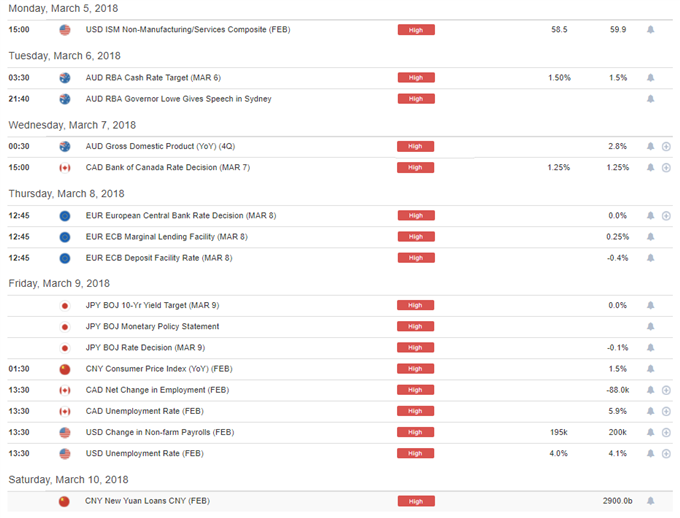 The US Dollar is back-below the 90.00 level after an interesting Thursday throughout financial markets[14]. Dollar strength had largely remained[15] through the testimony of new Fed Chair Jerome Powell. But, it was around 12:50 Eastern Time that President Donald Trump announced tariffs on Chinese Steel imports, at which point a change-of-pace began to show and that’s largely continued since that announcement. One of the more visible moves has taken place in the US Dollar, as the Greenback was making a hard-charge towards the 91.00 level before this announcement came-out. Now, we’re testing the 90.00 level after falling back below the bearish trend-line on the chart below.

US Dollar via ‘DXY’: Dollar Strength Eviscerated After Thursday Turn-Around 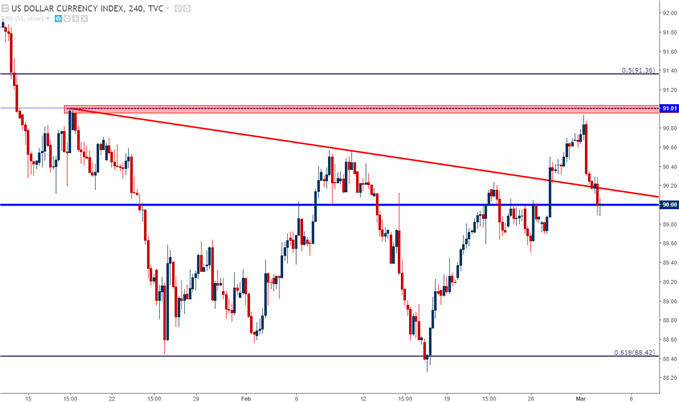 US Stocks Break the Bullish Trend

Also moving along with that announcement were US equities. The S&P 500[17] came into the week with support around old resistance. Tuesday brought us a revisit to that support around the 2750 level, but a late-session sell-off on Wednesday pushed prices lower, with support eventually showing around the 50% retracement of the February sell-off. Yesterday’s announcement gave-us another sell-off, and prices moved down to the next Fibonacci level at 2662, at which point a bit of support has started to show.

That support doesn’t look all too positive, as bears continue to push prices and moves-higher have been promptly sold. A bit of short-term resistance has shown around last week’s swing low around 2684, offering another version of lower-high resistance as bears have started to show their hand. The net result of Mr. Powell’s testimony this week has been a 130 handle pullback in the S&P, and that’s just so far; we have a long way to go until market close for this week. 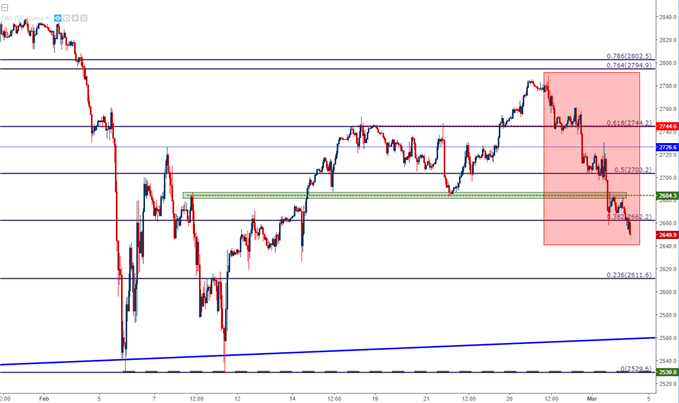 We’ve been following Yen-strength for a while now[19], as a rather pronounced change in tonality has shown thus far in 2018. This appears to be driven by rising inflation pushing investors to re-think stimulus bets[20], and this is very similar to what we saw throughout last year around the Euro and the ECB. Even though the ECB continued to say that they had no plans for exiting stimulus or even tapering their program, market participants continued to ramp-up bets that this would eventually happen, as can be evidenced by the rather smooth trend in EUR/USD throughout last year. Sure enough, as we came into this year and as growth and inflation have remained with a degree of stability, the initial grumblings out of the ECB have started to show-up.

Now, it appears that we have a building situation of a similar nature taking place in the Japanese Yen[21]. Inflation came-out at a 34-month high in January and this was released last week. Since that release, USD/JPY[22] has broken below a big symmetrical wedge pattern that’s been two-plus years in the making: 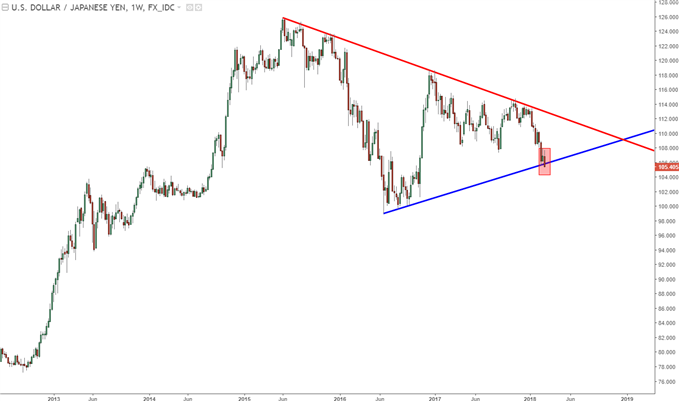 GBP/JPY Puts in a Major Move

Keep in mind, the Dollar was relatively strong before yesterday’s tariff announcement; but if we look elsewhere, such as GBP/JPY[24], that brutal strength in the Yen becomes a bit more apparent. GBP/JPY was holding support around the post-Brexit trend-line[25] as we came into this week. We had previously investigated a bearish stance in anticipation of that trend-line giving way[26], warning that a break-below could lead to significantly more bearish behavior. That’s what’s happened, and GBP/JPY has given up almost 500 pips already this week.

GBP/JPY Daily Chart: Down More than 1,000 Pips From February Highs 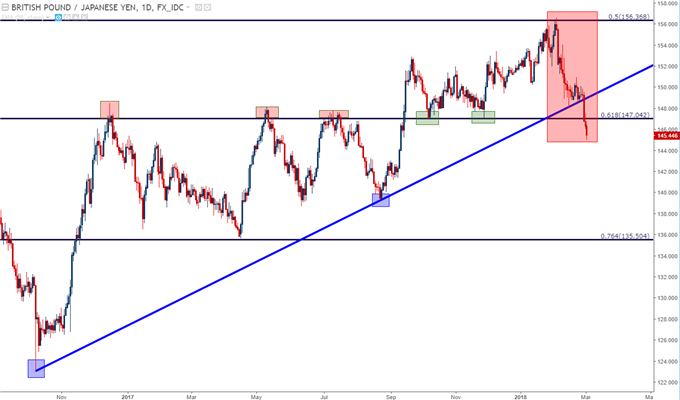 This weekend brings Italian elections[28], and that means a heightened degree of probability for weekend risk in the single currency. EUR/USD found support on the 50% Fibonacci retracement of the 2014-2017 major move at 1.2167. That support has held thus far, and prices are ripping higher, fast-approaching a prior zone of support for fresh resistance that runs from 1.2335-1.2350. 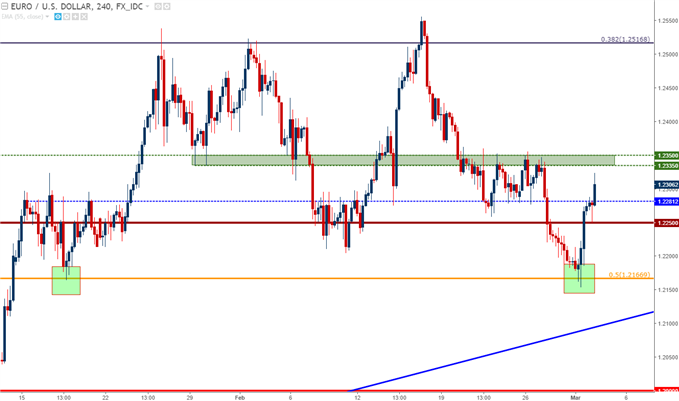 Traders will likely want to be very, very careful of holding weekend risk in the Euro, because even if getting on the right side of the move, the potential for whipsaw at the open could still trigger stops. Do not take such risk lightly, as there is really no telling what can happen with an event of this nature.

If we do walk-away with the net of more-Euro strength that can keep the currency in the cross-hairs for bullish strategies as we move towards next week’s ECB rate decision. But, the potential for turmoil is there; and traders should take into account the potential for wild volatility on the Sunday open in the wake of that election.

Are you looking for longer-term analysis on the Euro, the British Pound[30] or the U.S. Dollar? Our DailyFX Forecasts for Q1[31] have a section for each major currency, and we also offer a plethora of resources on our EUR/USD[32], GBP/USD[33], USD/JPY[34], AUD/USD[35] and U.S. Dollar pages[36]. Traders can also stay up with near-term positioning via our IG Client Sentiment Indicator[37].