- US President Trump threw a wrench into markets yesterday by announcing steep tariffs on imported steel and aluminum, following up his earlier moves on solar panels and dishwashers.

- Needless to say, the US Dollar – as well as other USD-denominated assets – did not take the news kindly.

- With volatility sticking around, it's a good time to review risk management principles derived from the Traits of Successful Traders[1] series.

Looking to learn more about how fiscal policy can impact FX markets? Check out the DailyFX Trading Guides[5].

US President Donald Trump shocked global markets yesterday by announcing his intention to introduce a 25% tariff on imported steel and a 10% tariff on imported aluminum. The US Dollar was slammed across the board alongside US equity markets amid fears of trade wars emerging. It’s important for traders to understand the economic significance of tariffs and how they impact economies. 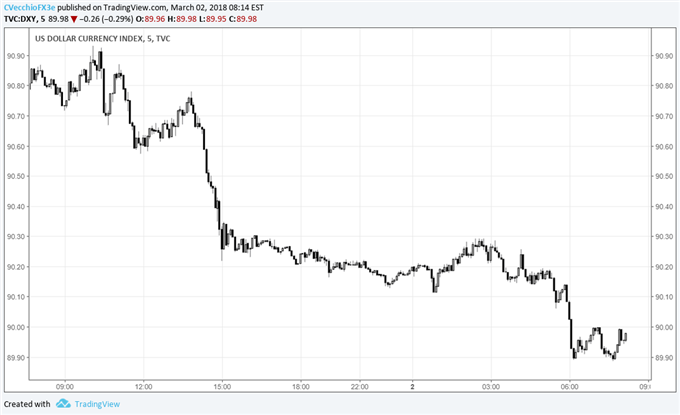 To no surprise, US steel and aluminum industry insiders are a fan of the 25% and 10% tariffs that US , respectively. As is often the case with protectionist tariffs, prices for goods using steel and aluminum will rise for entire economy while these insiders will capture the surplus. In this piece, we'll go in some historical examples of tariffs and their ensuing impacts.

Generally speaking, tariffs are “good in theory,” but “terrible in practice.” The theory is, “protect domestic industries,” but in practice, it means “enriching a small segment at the expense of the broader economy.” Adam Smith espoused this point in A Wealth of Nations, John Meynard Keynes in The General Theory of Unemployment, and empirical data collected over the past 400 years suggests the same conclusion…but I digress.

There are three main takeaways why protectionism via tariffs/limiting free trade is bad:

For example, tariffs on imported manufactured goods might be good for domestic US manufacturers, but they’ll be bad for anyone else, particularly US agriculture or US service jobs who are not in competition with foreign producers.

2) Protectionism, by its nature, leads to political artifice. Only those in preferred industries – with their goods protected – benefit from tariffs (profit margins are kept intact or boosted), but the costs (retaliatory tariffs from foreign governments or lack of access to cheaper, substitute goods) are shared by society. This makes it a useful tool for politicians to secure political support from say, disaffected workers who have seen their jobs move abroad for cheaper labor.

For instance, if the government slaps a tariff on imported steel, the US steel industry will notice the benefit right away while the rest of the country will perceive that they are paying more for any goods with steel in the industrial process. All of the additional surplus created is captured by the producer while the consumer foots the bill. This is bad policy on its own, but it gets substantially worse when unprotected industries plead with Congress for similar favor.

Graph 1: The Economic Effects of Tariffs (Courtesy of ThisMatter.com) 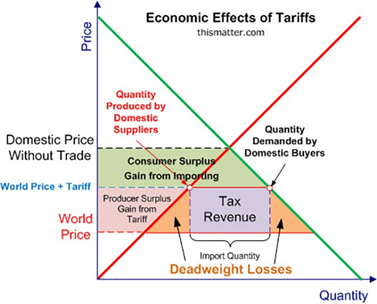 3) Protectionism leads directly to political corruption, as politicians become pressured to start protecting every industry. Over time, members of Congress are more or less bribed by corporate executives and titans of industry to keep the tariffs in place – they protect profit margins, after all.

The Tariff of Abominations of 1828 was enacted to protect Northern factories from foreign competition, but mainly, to promote US industries after the War of 1812. While this helped the nascent industrial processes, it led to market incongruities for the Southern agricultural economy. The impact on the South was so severe that it (along with another tariff in 1832) led to the 1832 Nullification Crisis in South Carolina. As history tells us, the theory that a state can threaten to nullify federal law proved to be a significant development: Southern states (starting with South Carolina) justified seceding from the Union in 1861 on such grounds.

The Smoot-Hawley Act of 1930 was a precursor to World War II, just as the Tariff of Abominations of 1828 was a precursor to the US Civil War. This was the last time that America embraced a protectionist policy, under President Herbert Hoover, levying taxes of up to 50% on imported goods. It was widely considered to be a blundering mistake that crippled global economic activity and helped accelerate the decline in the Great Depression.

The global trade freeze only ended when Congress passed the Reciprocal Trade Act of 1934, which gave the President, then FDR, the power to negotiate bilateral trade deals with other countries without Congressional approval. However, by that time that global economy had been broken for long enough to give rise to ethnic-nationalist populism in Europe.

While these may the most two prominent historical examples of trade tariffs that are good in theory but bad in practice, there is a more recent example in history that is a useful guide for where we are today: the 2002 steel tariff imposed by the George W. Bush administration.

A study on the 2002 steel tariff showed net-negative consequences for US economy, overall. You can read the report in full[7] here, but these are the highlights:

- 200,000 Americans lost their jobs to higher steel prices during 2002. These lost jobs represent approximately $4 billion in lost wages from February to November 2002.

- More American workers lost their jobs in 2002 to higher steel prices than the total number employed by the U.S. steel industry itself (187,500 Americans were employed by U.S. steel producers in December 2002).

- One out of four (50,000) of these job losses occurred in the metal manufacturing, machinery and equipment and transportation equipment and parts sectors.

- The analysis shows that American steel consumers have borne heavy costs from higher steel prices caused by shortages, tariffs and trade remedy duties, among other factors.

How did the US Dollar fare during this time? 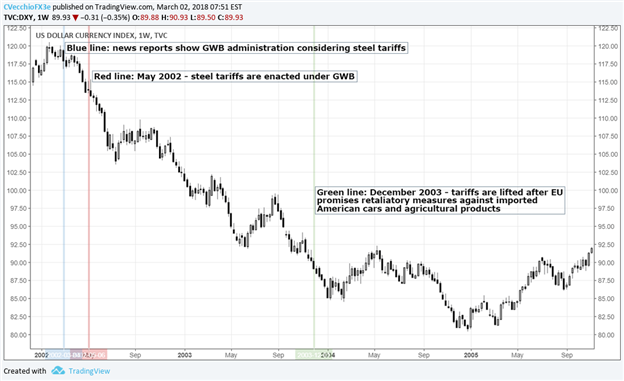 The answer: not well. And while the 2002 steel tariff was one of many factors influencing markets at that time – including the structural decline in long-term US Treasury yields – it’s hard to dismiss their sway on the perception of the direction the US economy was moving in.

Earlier today, US President Trump tweeted that “trade wars are good, and easy to win.” If this is the mindset of one of the policymakers with his hands on the levers of the US economy, traders should fully expect more tariffs to come down the pipeline – which means more volatility and tough times ahead for the US Dollar, US stocks, and US Treasuries.

To contact Christopher Vecchio, e-mail This email address is being protected from spambots. You need JavaScript enabled to view it.[9]

To be added to Christopher's e-mail distribution list, please fill out this form[11]

View our long-term forecasts with the DailyFX Trading Guides[12].