EUR/USD Decline May Not Be Finished 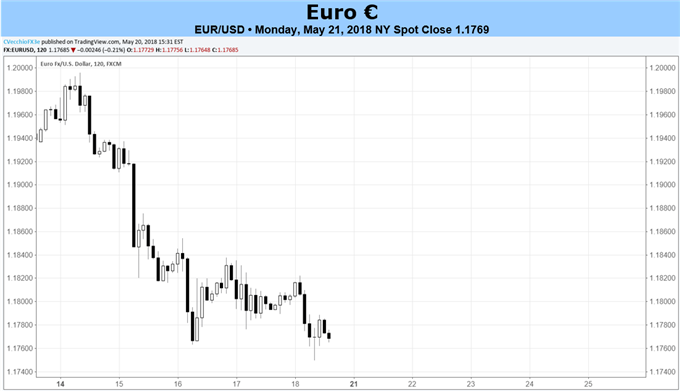 - The preliminary May Eurozone PMI readings aren’t set to improve, giving little reason for the Euro’s downtrend to end.

- The IG Client Sentiment Index[4] is once again suggesting to sell EUR/USD after recent shifts in speculative positioning.

See our long-term forecasts for the Euro and other major currencies with the DailyFX Trading Guides[5].

The Euro was the worst performing major currency last week, with EUR/CHF (-1.64%) and EUR/USD (-1.45%) leading the decline. A revision lower to the final April Eurozone CPI report coupled with signs that the United States would avoid significant trade disputes with China sapped demand for the low yielding Euro.

Concurrently, the fundamental backdrop for the Euro remains rather weak. The Citi Economic Surprise Index, a gauge of economic data momentum, closed last week at -91.7, still deep in negative territory (although no longer at its weakest reading since September 2011). This is a slight improvement from a week ago (-97.9) but not over the past month (-90.0).