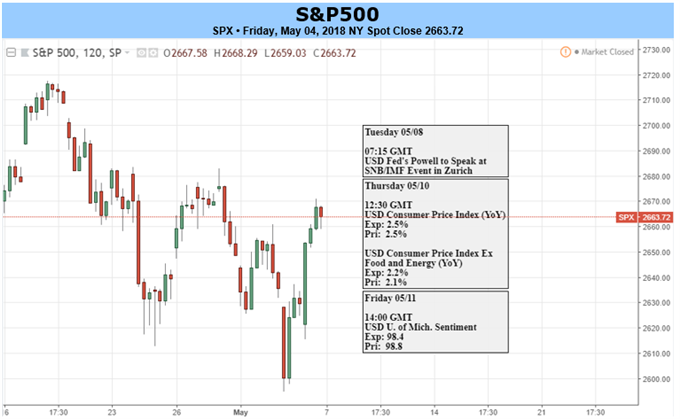 For the intermediate-term technical and fundamental outlook, check out the recently released DailyFX Q2 Forecasts[1].

Equity prices remain bid going into the second week of May, with the near-term outlook for the DAX[2] tilted to the topside, while the S&P 500[3] looks poised for a breakout amid the narrowing threat for a global trade war.

Even though the two days of deliberations in Beijing failed to produce any meaningful signs of progress, ongoing negotiations between China and the U.S. may continue to shore up market sentiment especially as President Donald Trump delays the steel and aluminum tariffs to June 1.

With the European Central Bank (ECB) interest rate decision out of the way, the DAX appears to be on track the extend the upward trend from the March-low (11,705) as the bullish momentum appears to be gathering pace.

Recent price action keeps the topside targets on the radar as the DAX breaks out of a near-term range, and a break/close above 12,872 (61.8% retracement) raises the risk for a move back towards 13,193 (78.6% retracement) as an upward trend takes shape. Future developments in the Relative Strength Index (RSI) may also reinforce a bullish outlook, with a break above 70 raising the risk for a larger advance in German shares as the indicator pushes into overbought territory for the first time since last-2017.

The S&P 500 trades on a firmer footing