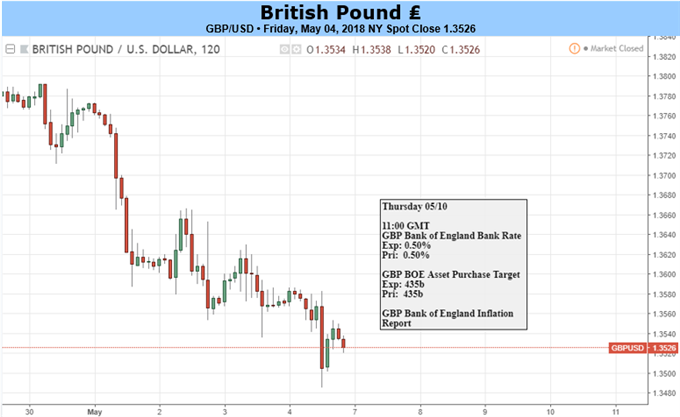 Recent UK PMI surveys failed to show any meaningful rebound with the Services and Manufacturing PMI readings missing expectations, while collectively the PMI figures pointed towards Q2 growth at a sluggish 0.2%. As such, this suggests that the underlying UK economy remains somewhat fragile, which in turn led to further selling pressure in GBP[2], sitting just above the 1.35 level.

The main focus this upcoming week for GBP traders will be the Bank of England’s Quarterly Inflation Report. After a string of poor data and cautious comments from Governor Carney, a May rate hike has been taken off the table with marking pricing falling from 85% to 9%. As we look towards the meeting risks are somewhat skewed to the upside, on the basis that the BoE provide a “hawkish hold” through a possible 7-2 vote split (McCafferty and Saunders voting for a hike), while acknowledging the transition agreement between the UK and EU, alongside dismissing the softer data due to transitory factors, which in turn could boost expectations for a rate hike in August.

Subsequently, this would support GBP in the short term given that market pricing for a rate hike in the near future is subdued with 14bps priced in for the August QIR and a 25bps hike not