UK manufacturing PMI data headlines an otherwise quiet European data docket. It is expected to show that the pace of factory-sector activity growth slowed to weakest in 10 months in April. UK economic news-flow has tellingly underperformed relative to forecasts recently, opening the door for a downside surprise that undercuts near-term BOE rate hike prospects and weighs on the British Pound.

The analogous US manufacturing ISM survey then enters the spotlight. A second consecutive month of moderation is projected after the gauge hit 14-year high in February. Anything shy of a dramatic deviation from consensus forecasts seems unlikely to generate a lasting response from the US Dollar, with traders probably unwilling to offer directional commitment ahead of the upcoming FOMC rate decision[1].

A status-quo RBA policy announcement left the Australian Dollar[2] rudderless. The central bank signaled that inflation is likely to remain low for a while yet, reinforcing expectations that it will refrain from tightening for the remainder of the year. The Canadian Dollar edged up alongside modest crude oil price gains[3] but both remained firmly confined within near-term ranges.

See our quarterly FX market forecast[4]s to learn what will drive prices through mid-year! 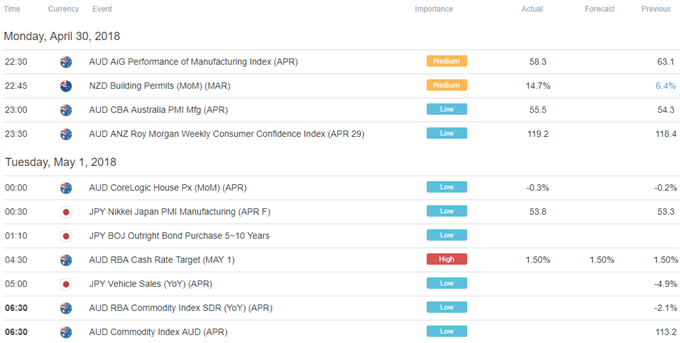