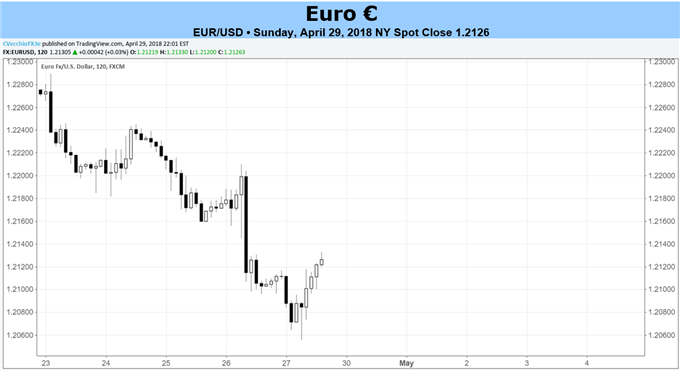 - The European Central Bank made clear that while it intends on winding down its QE program, interest rates will remain low for an extended period of time.

- The IG Client Sentiment Index[1] has a neutral view on EUR/USD[2], but traders are net-long for the first time since April 6.

See our long-term forecasts for the Euro[3] and other major currencies with the DailyFX Trading Guides[4].

The Euro had a mixed week as the calendar turned through the last full week of April, with exchange rates undercut in the aftermath of the European Central Bank rate decision[5] on Thursday. While no changes whatsoever were made between the March and April policy statements, the underlying message was that interest rates would stay low for an extended period of time, even as the ECB’s asset purchases program would be tapered further “until the Governing Council sees a sustained adjustment in the path of inflation consistent with its inflation aim.”

This comment made in the ECB’s policy statement bears significance in context of the data due out over the next week. Preliminary April German CPI and Eurozone CPI are both expected to remain well-below the ECB’s medium-term target of +2%, confirming market participants’ expectations that it remains highly unlikely that any sort of rates tightening will take place in 2018.

Of note, the preliminary April Eurozone Core CPI is due in at +0.9% from +1.0% (y/y), another sign that the relatively strong Euro (still