No Range Break in Sight Yet for EUR/USD 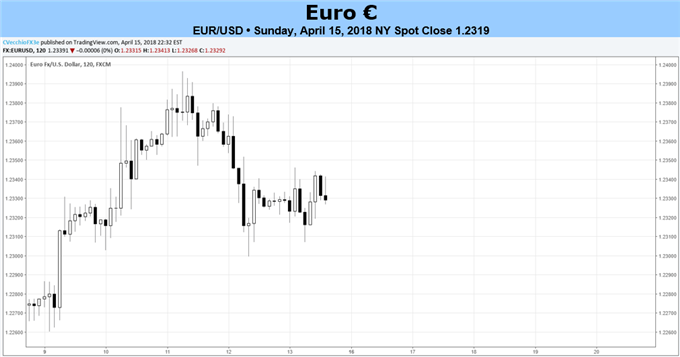 - Another quiet week on the Eurozone economic calendar means traders will continue to keep an eye tuned to the news wire.

- The Syria strikes are bad for geopolitical tensions, but what would truly impact the Euro[1] would be if economic sanctions were levied against Russia.

Against the US Dollar[5], the Euro has done practically nothing over the past six weeks. EUR/USD has traded within a 260-pip range since setting bullish key reversal on March 1, seemingly unmoved by the torrent of news headlines regarding trade tensions between two of its largest trading partners, China and the United States, nor has it been concerned with rising geopolitical tensions in Syria.

But the consolidation goes beyond the past six weeks. Since January 18, EUR/USD has traded between 1.2155 and 1.2556; larger than what’s been seen since March 1, but not much more (401-pips). Trend traders have been relegated to the sidelines, as have momentum traders. Yet so too have range traders, who prefer to sell near resistance or buy near support; price has been holding in the middle of both its six-week and three-month range consistently. To feel that EUR/USD is a tedious exercise in waiting patiently isn’t a misplaced emotion.

There are several interesting aspects of EUR/USD’s consolidation, but two stick out more than others. The first is the steep decline in the Citi Economic Surprise Index for the Eurozone, which