Euro’s Biggest Risk May Be Itself as Data Momentum Tanks 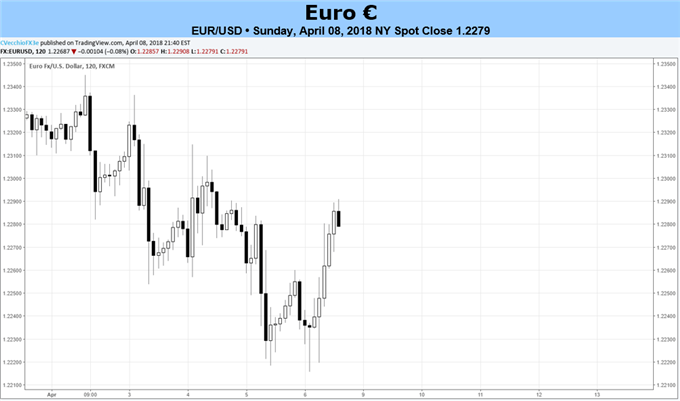 - The Euro[1] trade-weighted index is up over +9% year-over-year, suggesting that the Euro itself may be the biggest reason for data starting to disappoint analyst expectations.

- The week ahead sees a lighter Eurozone economic calendar, meaning the news wire will dictate a good deal of price action.

The Euro dropped against most major currencies last week, barely posting gains against the Swiss Franc[5] (EUR/CHF +0.18%) and the Japanese Yen[6] (+0.26%). Growing trade tensions between China and the United States may be provoking volatility in global equity markets, but has yet to significantly impact the Euro as the European Union has been thus far unscathed.

But behind the salacious trade war headlines, the Euro is facing a difficult reality: it may be too big for its britches. The Euro trade-weighted index is up by +9.1% over the past year, and its ongoing strength may be filtering through into data.

The Citi Economic Surprise Index for the Eurozone, a gauge of economic data momentum, fell to -79.2 at the end of last week – the lowest level since April 2013, when the Eurozone was at the depths of the sovereign debt crisis.

Evidence that the Euro’s appreciation over the past year is weighing itself down in the near-term is evident in inflation expectations as well. The 5-year, 5-year inflation swap forwards, ECB President Mario Draghi’s