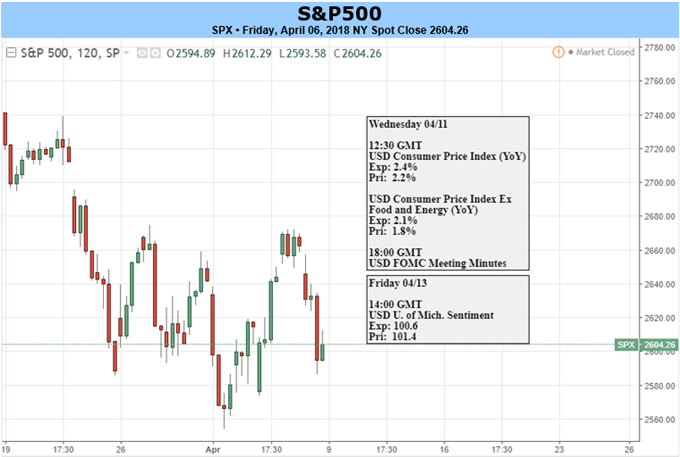 For the intermediate-term technical and fundamental outlook, check out the recently released DailyFX Q2 Forecasts.[5]

On Friday, U.S. Non-farm payrolls came in at 103k versus the consensus estimate of 185k, prior month revised up to 326k from 313k. The unemployment rate was 4.1% compared to 4.0% expected. This caused the S&P futures to gyrate in both directions pre-market, but nothing material net-net by the open.

Looking ahead to next week, we have a couple of key events highlighted by the release of the minutes from the March FOMC meeting on Wednesday. Also, due out earlier that day is March CPI, and the other ‘high’ impact data to be released arrives on Friday via the April preliminary UofM Sentiment survey. For full details on timing and estimates of all economic releases, check out the economic calendar.[6]

The S&P found significant sponsorship around the 200-day MA and the February trend-line last week, which helped put a rebound in place until Friday. Friday’s sell-off once again brought significant support back into play. Should it fail convincingly next week another major swoon could be in store. Watch the Dow[7], as it has a descending wedge top developing and suggests a major dive could soon be in store. 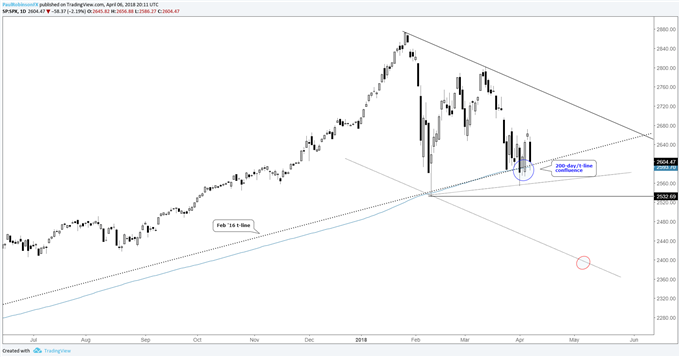 It’s a quiet week ahead on the economic calendar, with no